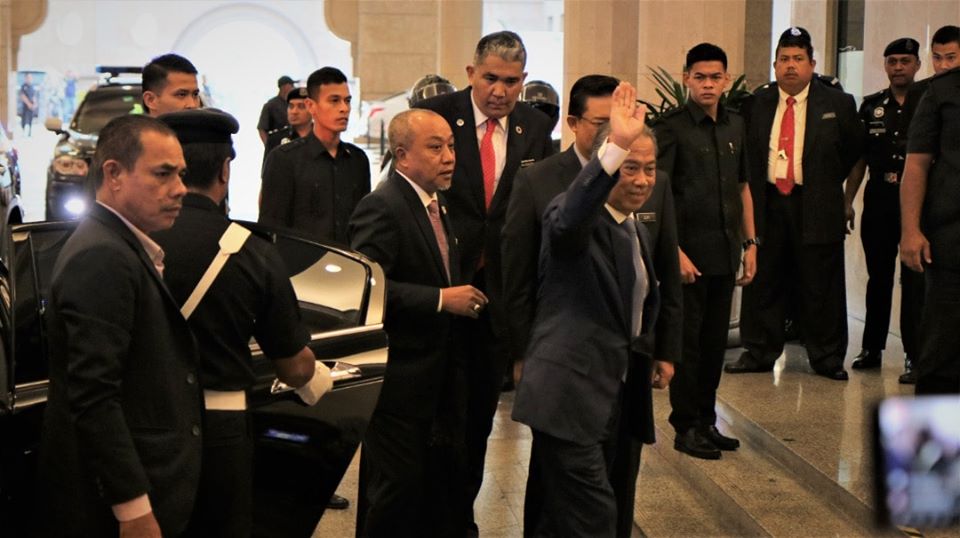 PUTRAJAYA March 2: Tan Sri Muhyiddin Yassin has expressed his deepest gratitude and appreciation to Tun Dr. Mahathir Mohamad for his great service to the nation.

In his first address to the nation which was aired over local television stations tonight under the title “An Appeal to Malaysians”, the newly-appointed Prime Minister Tan Sri Muhyiddin Yassin also stressed that he is not a traitor when appointed as the 8th Prime Minister of Malaysia by His Majesty Yang di-Pertuan Agong on March 1, 2020.

“I am here as the Prime Minister to save the country from the political crisis which has been going on for some time last week.

“I know I am not appointed as a Prime Minister following the General Election but I have no choice. As a leader I have to find a solution after Tun Dr. Mahathir ‘s support had been down,” Muhyiddin said in his first exclusive speech telecasted on TV1 this evening.

Muhyiddin who is also the Pagoh MP said, following the critical situation, he and two other distinguished persons went to meet Dr. Mahathir to discuss the matter and he (Dr. Mahathir) has given him (Muhyiddin) the green light provided he has the majority support from the MPs.

He said at that time his party Bersatu had nominated him as the eighth prime minister with other political party support. This was in line with Yang di-Pertuan Agong’s request that political parties nominate a name and whoever gets the majority support will be the prime minister.

In a press conference on February 27, Muhyiddin said Dr. Mahathir has also mentioned that he agreed on the nomination of the Bersatu President (Muhyiddin Yassin) as the eighth Prime Minister.

In the speech, Muhyiddin stressed that the new government will be of high integrity, good governance, free from bribery and power abuse. The government will also amend and improve existing laws and procedures.

Muhyiddin also ensures that he will choose only “clean” members to be ministers in the new government.

“I am aware that people want an efficient government that takes care of their economic well being. The people want to buy books for their children, pay house rents, pay loans, pay family expenditures and more importantly to have good and high-quality health services,” Muhyiddin added.

Muhyiddin was the Deputy Prime Minister and Minister of Education under the Barisan Nasional regime for six years before UMNO sacked him in 2016.

As a former Minister of Education, Muhyiddin said education is very close to his heart and for that he will ensure the quality of education will be elevated

“The quality of education should be raised so that our children’s achievement will be at par with the children in other countries.

“The new government will make policies that will narrow the economic gaps between races. I am the Prime Minister for all the people from Perlis to Sabah and Sarawak. I am the PM to the farmers, fishermen, entrepreneurs/business people, civil servants and workers in the private sectors and others.

“This is a big responsibility and I have been entrusted to lead the country with 40 years experience in the government. I hope the people will support and together we build Malaysia to be more prosperous,’’Muhyiddin reiterated.

Before ending his speech he thanked the Malaysians for being patient and stays calm during the political crisis.

“I would also like to thank Tun Dr. Mahathir Mohamad for his great work and services for the country all these years,”Muhyiddin said. –Malaysia World News