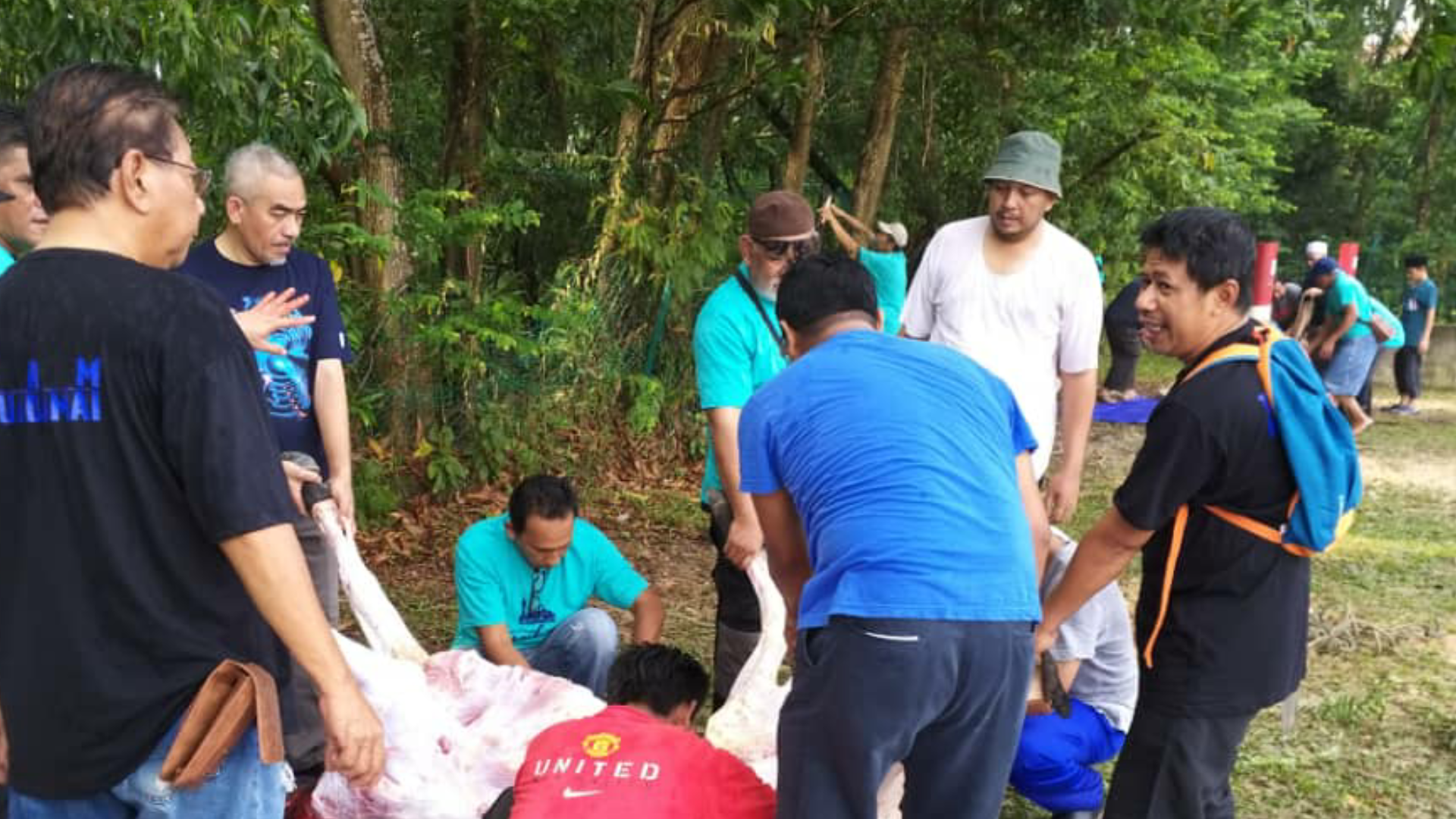 The event known as “qurban” or special sacrifice to almighty Allah was participated by 77 persons with seven people sharing in every one cow.

Surau As- Siddiq’s Chairman, Hj.Alias Ahmad said, the qurban event had been held for the ninth year and the number of cows slaughtered for the holy purpose was limited to 11that is 10 from the BTHO residents and one cow was given by the Selangor state government.

“We maintain 11 cows every year as we have limited number of people to manage the slaughtering, cleaning and distributing the meat to the rightful people in the specified quantity.

“We will give away one third of the meat (beef) to the welfare homes, tahfiz and also orphanages and another one third to the 77 participants and the rest to the BTHO residents around Surau As-Siddiq,” he said in an interview with Malaysia World News today.

According to Alias, the slaughtering was done by Ustaz Jamaluddin and two Surau members.

“We are happy to see many young people coming in as volunteers to manage the qurban event this year. The number of youngsters is equal to the old retired people who have been doing the holy work for years here,” he added.

About 500 people including the BTHO residents and 50 Bangladesh workers had participated in the event that ended with a sumptuous lunch served for the solat Zohor jemaah and the volunteers.

Relating to netizens’ comments that more Malaysians prefer to offer cows and sheeps as their sacrifices (qurban) in Cambodia, Phillippines and Vietnam for cheaper rates, Alias said, it depends on one’s intention.

“For a person to offer a sacrifice (qurban) it is good that he/she witnesses the slaughtering and bleeding of the animal.

He said, it could be possible that they do the “qurban” outside Malaysia as the quota has been filled and they have no choice but to go abroad.

Qurban means sacrifice. The significance of this Aidiladha (Eid) is from the offering of Prophet Abraham (as), who prepared to present his son Ismail (as) to Allah, upon having dream of such a command. He prepared to offer his son, but this was a test from Allah, so before he could slaughter his boy, the angels replaced him with a sacrificing animal.

To remember this sacrifice of him, the Muslims who can afford to, make an offering to Allah of an animal. This is called Qurbani. It is not an obligation, but necessary for all who are earning and have enough money to do it.

The meat of the animal should be divided into three portions, one third is distributed among the poor, another part among relatives and friends, and the third is consumed in the family.

The qurban event is reknown to all Muslims round the world. In some countries example Morocco, each family will slaughter a sheep or a cow every year during Aidiladha as a special sacrifice to Allah.-Malaysia World News