The American Askren to fight Swedish Zebaztian in SHANGHAI

American Ben Askren, ONE Welterweight World Champion, will be entering a new territory on Saturday, 2 September to fight Swedish contender Zebaztian “The Bandit” Kadestam in the main event of ONE CHAMPIONSHIP Shanghai, China.

Malaysia World News has received a full report and interview with Askren today from ONE CHAMPIONSHIP. (Watch the full video interview above).

Askren has conquered ONE Championship and become the biggest star in the constantly-growing world of martial arts in less than four years.

Known by the moniker “Funky,” Askren made an impact in his first two assignments in ONE Championship, submitting Bakhtiyar Abbasov with an arm-triangle choke in his May 2014 promotional debut before thwarting Nobutatsu Suzuki in the first round to claim the organization’s coveted welterweight crown three months later.

Askren has also defeated the Malaysia’s Agilan “The Alligator” Thani this past May in a first-round submission triumph and kept his immaculate record intact and the ONE Welterweight World Championship belt around his waist.

According to ONE CHAPMIONSHIP statement, he has never lost a world title contest since outpointing Lyman Good for the Bellator welterweight belt in October 2010.

Askren made history when he unified Bellator’s 170-pound’s top prize with the ONE Welterweight World Championship by pulling off a first-round demolition of Suzuki in August 2014.

“I’ve held two belts. I’ve never lost them, and I’ve held them for a combined six years, which is a very, very long championship reign by anyone’s account,” he said.

Askren made the transition to mixed martial arts and has flawlessly translated his impeccable grappling skills into his growing skillset.

The 33-year-old American has been perfect in competition, amassing an immaculate professional record of 16-0 with 1 no contest en route to becoming the ONE Welterweight World Champion.

“16 is the number of times I’ve stepped in the cage, and I’ve never taken a loss. I think I am one of the best in the world, and I think it also says a lot about the consistency I bring. I bring a great performance every single time I step in the cage,” Askren explained. 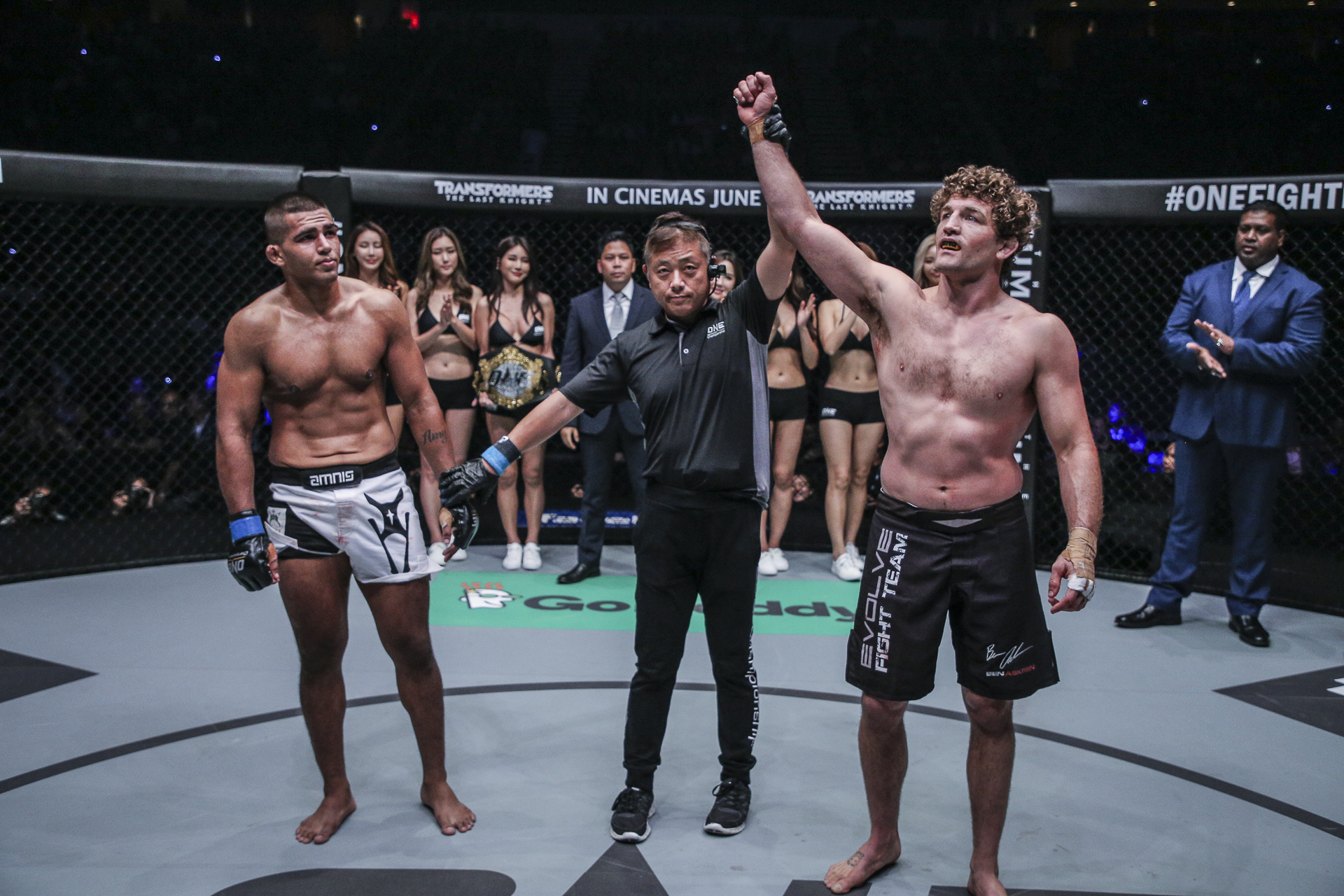 Askren is highly regarded for his outstanding wrestling background that earned him two NCAA Division I national championship trophies and the privilege to represent the United States at the 2008 Beijing Olympics.

While many children were motivated to first pick up a basketball because of Michael Jordan or kick a soccer ball because of David Beckham, Askren was a little different.

Growing up in the Midwestern United States, a region traditionally known as a hotbed for amateur wrestling, Askren was motivated by the spirit of competition and wanted to participate in a sport where he could be the master of his own fate.

During his illustrious college wrestling stint, Askren won 87 matches in a row, which made him one of the best grapplers in the collegiate ranks.

Askren finished his collegiate wrestling career with a record of 153–8, with 91 of those victories coming by way of fall. Those 91 pins put him at third on the all-time NCAA Division I pins list.

Even though there are many combat practices in mixed martial arts, Askren stands firm on the notion that wrestling is the most vital discipline in the sport.

Wrestling has been often regarded as the best foundation in the sport as numerous wrestlers transitioned easily into the sport, including Randy Couture, Dan Henderson, Daniel Cormier and Frankie Edgar.

Throughout the course of the sport’s history, wrestlers have shared the cage with other practitioners on numerous occasions.

In the current state of the sport, wrestling has become a necessary requirement for combatants to extensively learn.

“If you’re going to ask a lot of the mixed martial artists, they’re going to say that wrestling is the number one martial art to learn,” Askren stated.

The undefeated ONE Welterweight World Champion has been all over the globe, competing in countries such as the United States, Singapore, United Arab Emirates and the Philippines.

Since being part of the ONE Championship roster, Askren has travelled 108,000 kilometers for the promotion’s blockbuster events.

“I really enjoy travelling. My trips to Asia have been a pleasure for me. I always enjoy seeing new cultures and learning new things,” Askren stressed.